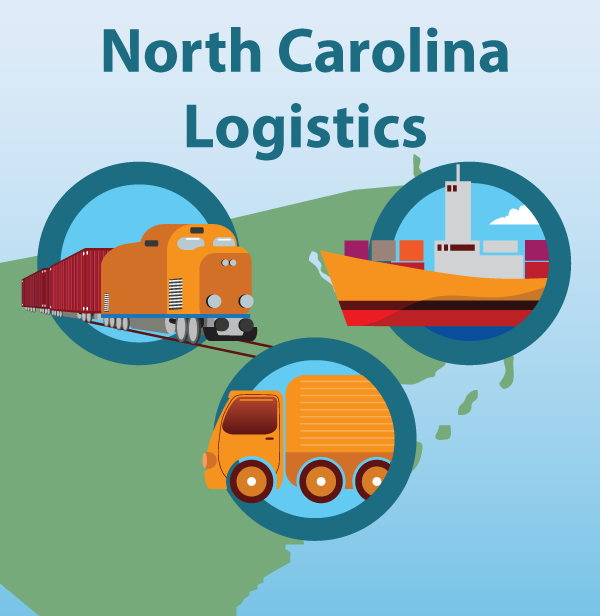 With logistics, as in real estate, location is everything. Kanban Logistics is excited that its Eastern North Carolina home is becoming a hotbed of logistics activity and infrastructure investment. Things are looking up for NC logistics.

Rich in history, Eastern North Carolina is considered a center of agriculture, generating a total income of $6.7 billion in the region annually. The area also boasts a robust military presence, supporting an economic impact of $48 billion and 540,000 military-related jobs each year, according to Governor McCrory’s 25-year vision for the state.

Currently under construction, the “Carolina Connector” is an intermodal terminal that will be used to draw and reroute containers from East Coast trains and trucks from North Carolina’s seaports in Morehead City and Wilmington.

Sebastian Montagne, strategic planner for North Carolina DOT. He expects to see more intermodal stops in Eastern NC’s future, including one that will be built near the Twin Counties of Nash and Edgecombe and another that will be known as the Queen City Express.

The latter will be a direct intermodal rail service that allows massive containers of goods to travel from the Port of Wilmington to Charlotte and vice versa – taking trucks off the highways and perhaps further incentivizing new business in the state.

“This is going to allow more people to access the rail infrastructure,” says Montagne. “That’s a very good development for a wider array of businesses that want to take advantage of the savings that come along with rail freight.”

The state is investing in NC’s logistics infrastructure. In addition to the CSX hub, money is being spent to widen seaports to accommodate more shipping activity.

“Over the last three years there’s been an increase in containerized shipping as a result of those investments,” says Montagne. “It doesn’t hurt that a number of global developments also resulted in more shipments coming to North Carolina. The combination of good investments plus favorable trade winds has been positive for the region.”

The DOT has also been working on Eastern North Carolina’s road infrastructure. Two new designated interstates, for example, are expected to transform the region in the near future. Raleigh-to-Hampton Roads (I-87) will connect Northeastern North Carolina to Virginia and Piedmont Crescent, the latter of which is a growing, mega-population site, according to Montagne.

“Interstate 87 will provide a much-needed connection for this region that will better link its citizens to vital services, support freight movement, and open the door to new economic opportunity,” said Governor McCrory in Governor McCrory Unveils Future I-87 in Edenton.

The other interstate is U.S. 70—a road that will help connect Piedmont Crescent with military bases and the Port of Morehead City. One of the primary east-west corridors across eastern North Carolina, U.S. 70 is heavily used for moving freight, and is just a few miles south of the North Carolina Global TransPark. According to Montagne, the DOT is working to improve passenger and freight movement along the U.S. 70 Corridor from Raleigh to the Port of Morehead City to improve NC’s logistics infrastructure.

These and other transportation improvements are garnering the attention of businesses and their site selectors. “There are a lot of site selectors out there looking at the interstates as a determining factor on whether they want to resettle or move into the Eastern N.C. area,” says Montagne. “Both of these new developments are going to be transformative.”