If you import products from Asia, the most significant shipping event in 2016 will be the completion of the Panama Canal expansion. The upgrades will double the capacity of the Canal and allow it to serve post-Panamax shipping vessels, which are the length of four football fields. 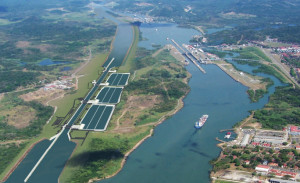 This raises some interesting possibilities for East Coast logistics, since East Coast ports are likely to see increased volumes once the redesigned Canal is active. A recent study by Boston Consulting Group found that as much as 10 percent of container traffic between East Asia and the U.S. could shift from West Coast ports to East Coast ports by 2020.  To understand the extent of that shift, handling this incremental volume would require the equivalent of a new port roughly double the size of the ports in Savannah and Charleston.

At Kanban Logsitics, we love our location within two hours of the Port complex in Hampton Roads, VA.

In fact, we currently provide East Coast logistics services to several customers who import through Hampton Roads. The Hampton Roads complex has a strategic position and infrastructure, including inland rail connections, which makes it perhaps the most “canal-ready” of East Coast ports. Channel depth is already at 50 feet, and there are plans to go to 55 feet at Norfolk. It has room for terminal expansion and is served by the Norfolk Southern and CSX railroads with no bridge or tunnel impediments that exist at other major ports.

There’s no doubt that many importers are looking to shift at least a portion of Asia import cargo from West Coast ports to East Coast ports once the Panama Canal expansion is completed. And when these shippers look at what their options are, the Norfolk/Hampton Roads complex seems far more ready to serve as an East Coast logistics hub than competing ports. Baltimore, Savannah, and Miami are all making major investments to get ready for Post-Panamax shipping. Even New York/New Jersey is scrambling to complete an increase to the height of the Bayonne Bridge, which must be raised because it is too low for the larger post-Panamax ships.

Located in Eastern North Carolina, Kanban offers an excellent inland distribution option for East Coast imports coming into Norfolk/Hampton Roads. Kanban is just a two-hour highway drive to the port and offers much lower distribution costs than areas in and around the port.   With an active free trade zone, Kanban even allows customers to defer duties on their East Coast imports until the products leave the Kanban warehouse. So product moves quickly through Customs and right to the Kanban FTZ warehouse in Rocky Mount, NC., where products can be further manipulated and packaged prior to final shipment.

Preparing for the Future

Currently, fuel costs are low, keeping overall freight costs in check.  But few in the know believe that will continue indefinitely. When fuel costs inevitably rise, companies will have to consider fuel-efficient water travel as a way to get goods to their customers in the eastern U.S. and Midwest.  And when they evaluate options, Norfolk offers compelling advantages for an East Coast logistics hub.