North Carolina was just named Forbes’s 2017 Best State for Business in its annual ranking of all 50 states.  For us North Carolinians, this further reinforces our strong belief in the capabilities of the Tar Heel State when it comes to all things business- and logistics-related.

From the economy and government support of logistics industry, to the state’s infrastructure and access to transportation, we see North Carolina as the optimal location for East Coast distribution. 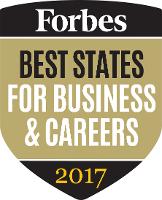 In this annual ranking, Forbes examines states across 6 key categories: business costs, labor supply, regulatory environment, economic climate, growth prospects and quality of life.  North Carolina is the only state to rank in the top 20 for each of these 6 categories.

According to Forbes, “North Carolina has built one of the country’s strongest business climates over the past two decades, fueled by low business costs, incentives and a young, educated workforce, many of whom have been trained at the strong universities in the state.”

This is not the first time that North Carolina has ranked high on the Best State for Business list.  The state has ranked in the top 5 for 12 consecutive years, though this is its first time ranked #1.

As great as North Carolina is for business in general, it’s also an exceptional location for all things logistics.  This is especially true for the eastern portion of the state, which is associated with lower logistics costs than Raleigh and points west.  Some of the characteristics that make the state ideal for warehousing and distribution, and other logistics operations include:

Location – North Carolina sits smack in the middle of the East Coast, midway between Miami and Boston, with access to several vital interstate highways like I-95, I-85, and I-40.  It also enjoys access to rail systems and East Coast ports.

Space – In addition to its prime location, North Carolina has an advantage that other metropolitan areas don’t: we have space.  There is plenty of space for new industrial construction, as well as expansion of existing structures – areas in which the state government has stacked its resources in recent years.  With this space also comes maneuverability and a lack of congestion that other metro areas simply don’t have.  Trucks can wait hours to get into the Port of NY and NJ, the largest port on the east coast.  A single move at one of the North Carolina ports, however, takes an average of 18 minutes, and a dual move only takes about 30.

Ports – North Carolina is home to seaports in Wilmington and Morehead City, and to inland container ports in Charlotte and Greensboro.  The Port of Wilmington boasts a navigation channel of 42 feet, a capacity of 600,000 TEUs, and ever-increasing capabilities such as on-terminal cold storage and the ability to welcome post-Panamax vessels.  Back in July, we shared the news the State’s ports had already doubled their container business for calendar year 2017 over 2016.  This unprecedented growth is expected to continue into 2018 and the foreseeable future.

Rail – North Carolina contains multiple freight rail systems, including those run by CSX and by Norfolk Southern Railway.  The state’s intermodal capabilities continue to expand, as evidenced by the brand-new Queen City Express, which allows the transport of massive containers between the Port of Wilmington and Charlotte.

Workforce – As noted in the Forbes article, North Carolina has a young and well-educated workforce.  The state also has the fifth-lowest labor costs in the country, 10% lower than the national average.

Infrastructure – North Carolina has chosen to adapt by strengthening its infrastructure, especially its transportation and logistics infrastructure.  The state aims to become a national leader in intermodal transportation, and had the foresight to begin investing in this area years ago and continues to do so.  In fact, much of the state’s infrastructure investments are in the areas of manufacturing and distribution.

At Kanban, we specialize warehousing and East Coast distribution services from our 1 million square warehouse campuses in Eastern North Carolina – a perfect central location that is within one-business-day’s reach of 70% of the U.S. population.  We also can combine warehousing with a host of value-added services such as rework, kitting, packaging, returns processing, cross docking, QVC vendor services, and eCommerce fulfillment. To learn how Kanban can help you take advantage of North Carolina’s business and logistics capabilities, contact us today.